How can you believe in a Bible that is full of contradictions?

The frequency with which this question is asked is truly amazing. The question assumes that the Bible is full of blatant contradictions, which, if they were real, they would preclude any hypothesis of divine origin. This idea has had good propaganda, so much so that it has now become very popular although without foundation, and it is used not as a real question, but to insinuate that the Bible is not reliable.

Since we agree with the thesis according to which a God who knows everything could not have written a book full of contradictions, we absolutely cannot accept the statement that defines the Bible as a book “full of errors”. It is very easy to make such an accusation against the Bible, but it is practically impossible to prove the nature of these errors. 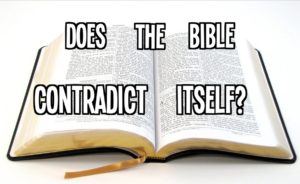 It is certainly true that some passages, if read superficially, may appear contradictory, but a more accurate analysis inevitably proves the opposite. Before proceeding, a little premise is needed. Because far stricter standards are often used with the Bible than with literature of any other type, an appeal must be made to the fairness of judgment necessary to discuss the alleged biblical contradictions. We therefore demand that the rules applied to other texts are also applied to the biblical text, starting with giving the author the benefit of the doubt.

Before talking about the alleged contradictions of the Bible, we should define what a contradiction is. The principle of non-contradiction on which every form of logical thinking is based, states that one thing cannot “to be and not to be” simultaneously. In other words, it can't rain and it can't rain at the same time.

Proving the existence of a contradiction in Scripture is possible only if it is possible to demonstrate the violation of this principle. For example, if the Bible said, but it obviously doesn't, that Jesus died crucified in both Jerusalem and Nazareth would certainly be a mistake.

When we analyze the possible contradictions it is of capital importance to keep in mind that two statements may be different from each other, without contradicting themselves. The mistake of some is precisely that of neglecting the distinction between ambiguous sentences and contradictory sentences.

Take for example the case of the blind men of Jericho. Matthew relates that two blind men met Jesus, while both Marco and Luca mention only one. It should be noted that the two accounts do not deny each other, but rather the one is complementary to the other.

Let's imagine that we are talking in the town hall of our city with the mayor and the chief of police. suppose that, later, telling the episode to a friend, we tell him we talked to the mayor. Meeting another friend, instead we could tell him that we have been in conversation with the mayor and the chief of police. If our two friends, meeting, they compare what we have told them, a contradiction will appear to them that in reality does not exist. Similarly, many think they find errors in biblical statements, but this only comes from an inaccurate reading.

Many object that the passage in Genesis 4:17, where it is written that Cain took a wife, does not agree with the previous chapters of Genesis, which do not mention daughters of Adam and Eve. Indeed the problem is solved if we also consider Genesis 5:4 which states:

"The time that Adam lived was eight hundred years, and begat sons and daughters ".

On other occasions it may happen that two passages appear contradictory due to an inaccurate translation from the original languages. It is difficult to perfectly convey the particularities of a language, and only a perfect knowledge of the Greek and Hebrew original languages ​​of the Bible) can solve these problems.

For example, the two accounts of Paul's conversion, reported in the book of Acts, they seem to be contradictory. proceedings 9:7 dice:

«The men who were with Paolo were speechless with surprise, because they heard the voice well, but they didn't see anyone ".

proceedings 22:9 it is generally translated:

“The men who were with me saw the light, but they did not hear the voice speaking to me ".

On the surface these two statements are contradictory, as one says that Paul's companions heard a voice, while the other states that no voice was heard. The problem is solved through a more scrupulous analysis of the Greek text (presented here by the Greek scholar W.F. Arndt):

The two accounts use two different grammatical forms of the verb to hear (akouo). In proceedings 9:7 it is used in the genitive, while in proceedings 22:9 we find it with the accusative. The genitive form expresses the general idea of ​​a sound that reaches the ear, without specifying whether those who hear it can decipher it or not. The form with the accusative, instead, describes a listening that implies the mental understanding of what is heard.

From this we clearly see that the two passages are not contradictory. proceedings 22:9 he does not therefore deny that those who were with Paul heard certain sounds; he simply states that they did not understand what was being said. The problem is in reproducing the grammatical subtleties of Greek.

Our critics should be pointed out that, when a possible explanation is given to a supposed biblical difficulty, it is unreasonable to claim that that passage contains a demonstrable error. Some difficulties are simply the result of inadequate knowledge of the circumstances and do not involve any errors. Archaeological and historical studies contribute to an ever more complete knowledge of Scripture, shedding new light on difficult and apparently wrong passages. This encourages an attitude of patient waiting for passages that may not yet be entirely clear.

Even if the biblical difficulties have not yet all been resolved, we firmly believe that they will fade with the advancement of discoveries in the biblical past. The Bible presents God as an omniscient and omnipotent being, so we are convinced that His Word, if well understood, it never contradicts itself.

4 July 2015
Jesus says not to judge. Because, then, especially in the religious world, many, both individual believers and at the level of organizations, they calmly judge the work and ideologies of…