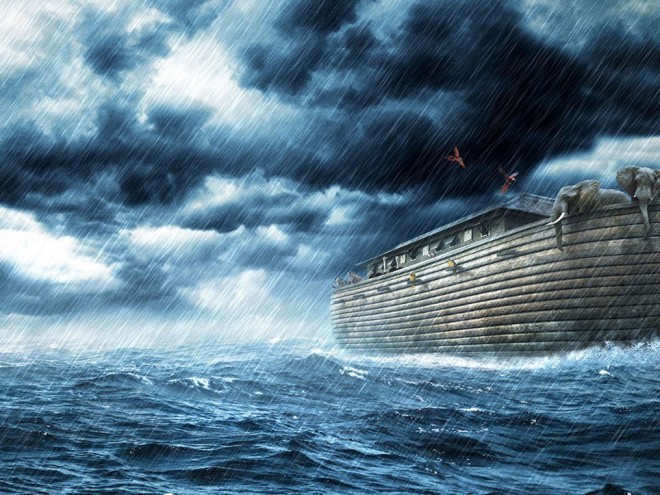 “Then God said to Noah,: 'I am determined: the end of all flesh has come, for the earth, because of them, It is filled with violence; here, I will destroy them together with the earth '.” (Genesis 6:13 – P) – “And it happened, on the seventh day, that the floodwaters were upon the earth; in the six hundredth year of Noah's life, in the second month, on the seventeenth day of the month, on that very day, all the springs of the great ocean erupted, and the cataracts of the sky opened...” (Genesis 7:10-11 – P).

The value of the biblical story

La rthe age of the flood and its worldwide extension have always been considered fundamental truthscome from both Jesus and the early church. Currently, before the triumph of the evolutionist thesis, Christian churches have generally circumvented the difficulty by saying that the text of creation is only a myth and the story of the flood a legend that can be found again, in different forms, among all peoples and in particular among the Babylonians and the Sumerians, as well as the Assyrians. Now, far from being an argument against the authenticity of the flood story, this multiplicity of traditions among the peoples who represent the different branches of post-diluvian humanity, argues in favor of the biblical account. This means that the global flood was a real event, whose memory has been perpetuated in the peoples.

however, everyone agrees that there is a big difference between the biblical story, essential, concise, sober, clearly written with historical and pedagogical intentions, and the legends of other peoples, patently “fictionalized”. There is no doubt that the Bible speaks of a global and not a local flood. The duration of the flood itself – more than a year and not 40 days, as is commonly believed – and the dimensions of Noah's Ark can only be explained in the case of a world catastrophe. therefore, the fossils that, for evolutionists, they are the trace of evolution, for us in a radically opposite perspective they represent the vestiges of antediluvian life forms. These remains, scattered over the whole of the Earth, confirm the idea of ​​a universal flood.

Traces of this deluge exist today?

Nature certainly presents facts: how these facts will be interpreted by the science, in its many sectors, this is another matter. Believing scientists think that a catastrophe like the deluge explains much better the great changes that have taken place in nature; often these remain a mystery to the atand what, as we'll see, sometimes they fall into contradiction, in an attempt to find a solution. The most rigid and orthodox uniformism does not allow an interruption of this type to be admissible, and therefore needs, to explain the existence of what we see today, of billions of years. All kinds of catastrophe, including a global flood, it is inadmissible for scientists who advocate actualism (O “uniformity”) that, especially in geology, he wants the present to be the key to the past. To clarify better: even Christian scientists adhere to the principle that things actually unfold according to criteria of uniformity. Unlike the atheist scientists though, they admit that God can intervene and interrupt this uniform development when He wants, as he did in the flood of Genesis.

The evidence for a young world

From Adam and Eve to the procreation of the human race

The problem of the origin of life

The reality of Creation

31 August 2015
The Bible TOB (Ecumenical Bible Translation) resumes the translation of the Bible by the CEI, while the notes and comments are translated from the second French edition of 1987, revision of the…

30 August 2015
Dated to the mid-fourth century, cataloged with the first letter of the Hebrew alphabet (aleph), originally it contained, both the New and the Old Testament, together with the letters of Barnabas and the Shepherd…
Prev Next 1 of 28

13 June 2015
One of the classic pretexts people use to refuse to embrace Christianity is about presence, in the past as in the present, of the so-called "hypocrites" in the church. To people…