The Bible of Erasmus of Rotterdam 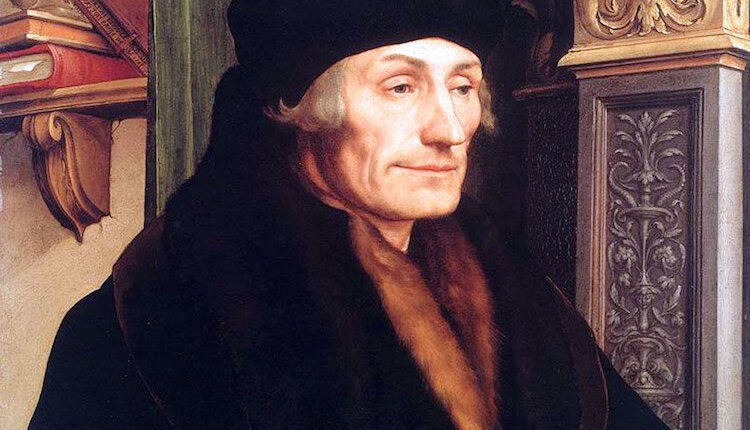 March 1 1516 Basel was published and put on sale at the publisher Froben Basel, the Every new instrument the great humanist Erasmus of Rotterdam.

Erasmo, for his edition chose the manuscripts that were more easily accessible, He brought the corrections deemed necessary and sent them directly to the printer, where they were treated as a manuscript any, on which typographic composers traced with utmost ease their signs recall. For the Apocalypse John's Erasmo he found no manuscript in Basel, but he had one loan from his friend Reuchlin. In this manuscript he was missing the final part of the Apocalypse: Erasmus solved the problem by making himself a retroversion from Latin into greek missing step and, moreover, with several errors.

The volume contained in the face of the greek text, a Latin translation made by Erasmo.

The fundamental flaw of this edition does not consist in the many errors that it contains, but in the type of text. Erasmo had laid the basis to issue codes of XII - XIII, which, a whole, handed down the Byzantine age text, Koine, the “Text majority”, that is, the most recent and the worst of the different types of text in which the New Testament has reached us; and the Erasmus successors followed him this way. The text of the issues we adhered to that of Erasmus is called textus receptus .

The work of scholars such as Bengel, Wettstein and Griesbach and especially by Karl Lachmann, professor of classical philology in Berlin, who declared the need to go back to the text of the Church of the end of the fourth century, will gradually lead to the abandonment of the textus receptus. The first to implement the program will be Lachmann Constantin von Tischendorf, who first translated the code of Efrem rescript (sec. V) and then effected the sensational discovery of the Sinaitic code (sec. IV), on which he based his edition of the New Testament. In Inghilterra Brooke Foss Westcott (Professor at Cambridge and later bishop in Durham) e Fenton John Anthony Hort (professor in Cambridge), They took as the basis for their edition of the Vatican Code (sec. IV). The final abandonment of the textus receptus occurred in 1898 with the publication in Stuttgart of Novum Testamentum graece Eberhard Nestle.

8 November 2015
ciao, Finally an intelligent person ! I too, like so many, have emerged from the sect of jehovah's witnesses. but one realizes the mistake only when you come out of it. (UNFORTUNATELY). I do not want to…

15 March 2021
question: "The Bible contains errors?"If we read the Bible without prejudice, we will find a coherent book that is easy to understand and interpret. Of course there are difficult passages and verses…
Prev Next 1 of 28

Role of Israel in the world