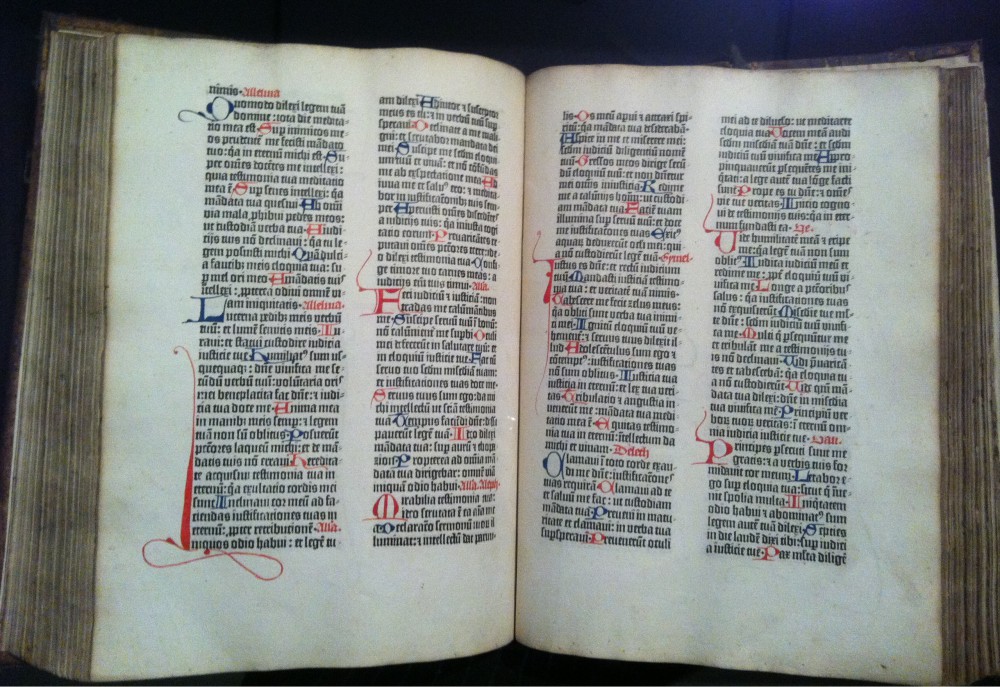 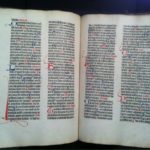 In 1452 Gutenberg began printing Jerome's Vulgate. To carry out this work, he needed financiers. Johannes Fust lent him the sum of 800 guilders in the 1449 and 1452 added others 800 guilders. Enea Silvio Piccolomini, who became pope with the name of Pius II, reported in 1455 who had seen several files of this Bible in October 145 4 to a Diet in Frankfurt. This would indicate that at that time the printing had already been completed. On the last page of the second volume of a copy kept in the Bibliothè que Nationale in Paris it is written that it was registered, painted and bound between 15 e 24 August 1456. Gutenberg wanted to imitate hand-copied codes, therefore it printed in two columns, using a gothic-like font, very broad, called “texture”.

The name derives from the fact that the characters in the vertical lines seem to contain an interweaving. Printing with movable type reduced the costs of copying texts and allowed their diffusion. Gutenberg printed as well as on parchment, also on paper. The paper was normally made from rags. The oldest manuscript on paper [Vat. Gr. 2200], dates back to the 9th century. D.C., while the code on paper Vat. Gr. 504 of the 1105 it is the oldest surviving paper Byzantine codex. Paper began to establish itself as a writing support only around the 11th century. D.C.. As we have already said, the first Bible printed by Gutenberg is in the Vulgate version. It is known as “Bible of 42 lines”, as the text is arranged in two columns per page, for a total of 42 lines. They were initially printed approximately 180 copy, 40 on parchment, 140 your letter, employing: 100.000 characters, 6 hurry and 20 printers, as well as various other assistants (inkers, card clerks, etc.). Each Bible had a total of 1282 pages. Due to the large number of characters required, only one page was printed per day. They were therefore necessary 3 years to finish printing. A copyist at the same time would have copied only one Bible! To black and white printing, the miniature followed. The rubrication of the initials and titles is in red and blue. I “Sacred appointment” are highlighted with a red line or a sign on the capital letter at the beginning of a sentence. Gives 2 a 10 lines, depending on the importance of the position, they were left blank during printing to allow illuminators to insert their initials.

Buyers of such Bibles could decide what kind of decorations they wanted, in this way each piece became unique. On the first pages of the Bible on paper, the traces of Gutenberg's typographic experiments are evident: 40 lines (sheets 1-5 and sheets 129-132), 41 lines (sheet 5 to), then 42 lines from the sheet 6 forward, hence the name. Currently preserved in Mainz, in the Gutenbergmuseum, has been declared ” patrimony of’ humanity” by Unesco. E’ entered in the register of ” World memory”.

The Bible of the Printing House Blaeu

What it means to be Christian?

Intermarriage: how to do if you are Christians but do not want to join the Catholic Church.

14 November 2015
mixed couples? Problems to celebrate a wedding? A future spouse refuses the Catholic Church? No problem, you can celebrate a mixed interfaith marriage between an intended partner…