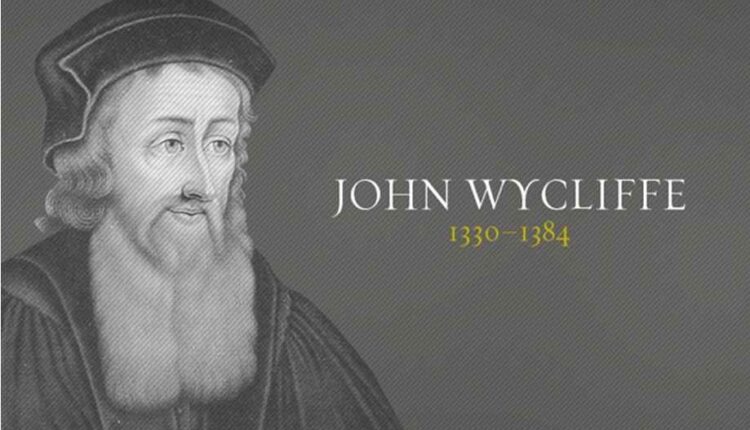 Wyclif is a true reformer, that had not happened, however,, because the reforms he proposed were united in ecclesiological errors and Eucharistic and violent controversy. What is certain is that Wyclif, in his criticism of the Church of the time, Central to the development of the Avignon papacy and the Church's institutional situation with abuses related, He had well individualized system to correct deviations and to delete:

The ideal is to inspire the Apostolic Church or otherwise pre-Constantinian. Wyclif also takes as its reference point the archetype of the Church (eternal, immutable, existing in God) that does not depend on existing Church. This is the true Church: therefore easy to reach the conclusion that the Church of his time had no value, because it did not correspond to the archetype. Wyclif also proposed concrete reforms against the decadent and devotion against the decadent life of the clergy, putting as a reference point the Gospel.

The Bible is not only the foundation of faith, but also the only true and absolute truth. It is the word of God, true in itself, that contains all the truth that you can learn about (even in its literal expression): therefore it should be taken as it is. It is the parameter of all knowledge and all conduct: from here, so that only what is right according to the Bible is true.

This principle does not amount to Sola Scriptura Luther, Wyclif because he admits the interpretation of the Fathers (especially Augustine) and Doctors recent (Anselmo, Hugh of St. Victor).

The denial of the papal primacy comes only in the writings following the Great Schism of 1378.

After the Schism Wyclif tries to show that there is the need for a pope in the Church, that there is not even a Roman primacy and power of the cardinals to elect a pope.

23 March 2015
Throughout history the New Testament has been copied and re-copied. She has not, by chance, changes immediately? There is a distorted concept regarding the transmission of the biblical text in the…

18 September 2015
The truth that God reveals to us in the Bible, contrary to human sciences, it is not acquired with natural intelligence, at least at the beginning of our Bible study path, nor with an effort…
Prev Next 1 of 28

The New Testament was written too long after…

8 March 2015
I segni degli ultimi tempi Dio mise Adamo in un giardino di delizie, but that first man took the only forbidden fruit by disobeying God's order. Thus he was cast out of Eden. A few centuries…