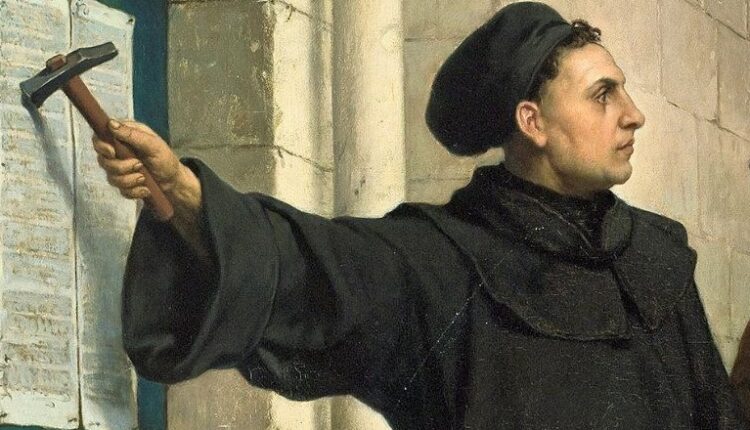 The Reformation of the sixteenth century was a movement within Western Christianity motivated by the desire to eliminate the abuses of the medieval church and to restore the doctrines and practices that the reformers believed to conform to the Bible and to the model of the church described in the New Testament. This led to the rupture between the Roman Catholic Church and the reformers, which started the Protestant Reformation, which goes back to the time when Luther posted his 95 thesis on the door of the cathedral of Wittemberg.

The factors that caused the Reformation were complex and interdependent. The forerunners of the Reformation included the movements initiated by John Wycliffe (i Lollardi) and John Huss (the Hussites) in 1300 e 1400. These reform groups anyway, they were located in England and Bohemia and were largely suppressed. The main factors that made the reform even more formidable were the intellectual and political changes of the period. The Renaissance of the previous century was a necessary preliminary because it raised the level of culture by rediscovering the old classics, contributed to learning and study, especially of classical languages (the Bible was in fact written in Latin) and presented humanism and rhetoric as an alternative to scholasticism. Especially through this emphasis on biblical languages ​​and full attention to literary texts, the Renaissance it made possible the biblical exegesis that led Martin Luther to the study of the Bible. In addition, Christian humanists such as Erasmus of Rotterdam criticized ecclesiastical abuse by promoting the study of both the Bible and the Fathers of the Church. L’invention of the Johann Gutenberg's print was a powerful tool for spreading the culture and ideas of the Reformation.

The Reformation began in Germany on 31 October 1517, when Martin Luther, an Augustinian university professor in Wittenberg, made his own 95 thesis inviting the debate on the legitimacy of sale of indulgences. The papacy, he saw this as a gesture of rebellion and took action against Luther by declaring him a heretic. German humanists supported Luther by supporting him in his cause during the early years. His famous treatises from 1520, “An open letter to the Christian nobility of the German nation”, “The Babylonian captivity of the Church” e “On the freedom of the Christian” they made him famous and gained popular support. He was excommunicated in 1521, but in April of the same year at the Worms diet before the Holy Roman Emperor Charles V and the German princes, he refused to retract his theses: he claimed that salvation is a free gift to people that occurs through the forgiveness of sins by the grace of God and faith in Christ, thus excluding the works.

Luther was protected by Frederick III, prince of Saxony, and other German princes – partly out of religious conviction, partly out of the princes' desire to take ecclesiastical properties, and in part, to affirm independence from imperial control. All these motivations supported the reformers. In 1530 many princes and cities signed the Augusta Confession presented to the Augusta Diet, as an expression of the evangelical faith. After years of conflict, the Augusta Peace Agreement was reached (1555) provided that every German prince had declared religious affiliation (Catholic or Lutheran), of the territory he owned. Lutheranism became the official religious denomination of Denmark, Sweden, Norway and Finland. In addition to the role of the princes, however, the Reformation quickly spread as a popular movement in Poland, Bohemia, Moravia, Hungary, and Transylvania.

The Reformation in Switzerland, to Zurigo, initially it developed under the guidance of the priest Ulrich Zwingli, influenced by Erasmus and Christian humanism. He came to the evangelical understanding of Christianity from his Bible study and contacts with Lutherans. The 1 January of 1519 began a series of sermons on the New Testament that lasted 6 years and that pushed the city council and the people towards reforms. The favorable response for the Sixty-seven articles, which he prepared in 1523 for public disputes with a pontifical representative, revealed the popularity of his program. He preached for the abolition of the Eucharistic Mass (and its replacement with a symbolic Lord's Supper), independence from episcopal control, and a city-state reform in which both Christian priests and magistrates would conform to God's will. It also influenced other cantons, like Basel, St. Gallen and Bern.

John Calvin, the birth of the Reformed and the massacre of the Huguenots

Through Lutheran missionaries and merchants, the evangelical movement widespread in France, it gained many converts, among which there was Giovanni Calvino. In 1536 Calvin went to Geneva, where a reform led by Guillaume Farel had been initiated, which was already well under way. Calvin was persuaded to stay in Geneva and helped organize the second great wave of Protestantism. In its ordinances of 1541, gave a new organization to the church made up of pastors, doctors, elders and deacons. He wrote Institution of the Christian Religion (1536) which had a great influence in France, Scotland (where John Knox led the Calvinist reform) and among the Puritans in England. Geneva became the center of a great missionary enterprise which reached France, where the Huguenots became so powerful that a Synod was held in Paris in 1559 to organize a national church, of about 2.000 reformed congregations. As a result there were wars of religion due to the Catholic monarchical repression of the Reformed Huguenots, culminating in the Massacre of San Bartolomeo, in 1572 between 23 e 24 August, where they were massacred 2000 Christians only in Paris and come on 5000 ai 10.000 in the rest of France, and all in the name of the king and the pope, at the time Gregorio XIII, that as soon as he heard the news he made a sing You gods of thanks, coin a medal with his own effigy to commemorate the event and commissioned the painter Giorgio Vasari a series of frescoes depicting the massacre, still present in the Sala Regia of the Vatican Palaces. Philip II of Spain expressed his satisfaction by declaring that this was the best day of his life: instead Queen Elizabeth I of England mourned and made the French ambassador stand for many hours before pretending to believe, for diplomatic reasons, to the thesis of the Huguenot conspiracy and the preventive massacre.

Although England also had a Lutheran religious reform movement that influenced ideas, the reasons for the reform here were more political. In fact the motivation is to be found in the will of the king Enrico VIII to divorce his first wife, Catherine of Aragon. The pope did not consent to the divorce so he issued the Act of Supremacy breaking away from Rome. The formal break with the papacy was initiated by Thomas Cromwell, the king of the head of government. Under Cromwell's leadership, Parliament passed the Supremacy Act (1534) which fully defined the king's authority over the English government and church. The Archbishop of Canterbury is at the head of the English church, Thomas Cranmer, who canceled the king's marriage to Catherine, and allowed him to marry Anna Bolena. Although Henry himself did not want to make doctrinal changes, Cromwell and Cranmer authorized the translation of the Bible into English, and Cranmer was responsible for the Book of Common Prayer (Book of Common Prayers) which contains the doctrinal regulations of the Anglican Church. With the death of Henry VIII his daughter ascended the throne Maria called the Sanguinaria (r. 1553-58), had with his first wife Catherine of Aragon. Mary re-established Catholicism in England very severely and had the Protestants massacred. It is with the death of Mary, whose reign was fortunately very short, that his half-sister came to power Elisabetta I, daughter of Henry VII and Anna Bolena, which reestablished state Protestantism and laid the solid foundations for Anglicanism, which has not changed since then.

The radicals were a great variety of evangelical groups that broke away from the first and second Protestant waves, and are known as Anabaptists because of their common opposition to infant baptism. Anabaptist leader Thomas Munzer played a leading role in the Peasant War (1524-26), which was suppressed with Luther's support. A Münster, l’ established radical Anabaptists (1533) whose theocracy was the communist one of the communion of properties, it was short lived. This too has been repressed. From the first, many evangelical movements have developed over the centuries that gave life to the very many Protestant denominations in the world, who developed many radical individualistic religious philosophies that have little to do with the doctrine of historical Protestantism and its internal structure: think of the Armenian awakenings of the Pentecostal movements born in 1900 and famous all over the world (in Italy also known as ADI and apostolic evangelical churches), s workers, known in Italy as the Assemblies of the brothers, etc, etc. In 1800 it was precisely from historical Protestantism in America that a movement led by C broke off. T. Russell who could not accept the biblical doctrine of Hell taught him by his Protestant parents, and worked out a whole twisted doctrine of his own leading over time to what we now call Jehovah's Witnesses.

An obvious result of the Reformation was the division of Western Christianity into Protestants and Catholics. Another result was the development of national churches, which strengthened the growth of modern nation states, as well as, previously, the growth of national consciousness favored the development of the Reformation. The Catholic Counter-Reformation – with the Jesuits whose leader was Ignatius of Loyola (sanctioned 1540), the Council of Trent (1545-63), the Inquisition, the index of Forbidden Books and the reform of the clergy – they gave new life to the old church which became even more rigorous on its old doctrines. finally, the most radical reform took place in the change introduced in ecclesiastical and political thought and organization, and thus began many of the trends that began to characterize the modern world.

What is the difference between Christianity, luteranesimo, Calvinism and…

Differences between Protestants and Catholics

30 August 2015
After the invention of printing, one of the first books to be printed was the Bible. The Hebrew text was also soon printed. The first complete printed Bible (editioprinceps) was published in 1488…
Prev Next 1 of 28

But is it really true that salvation is without works?

God hardens the hearts of those who are hardened by…

1 December 2015
Christians can celebrate Christmas, new year and birthdays? There are links with paganism? What did Paul really mean when he said not to observe particular days,…