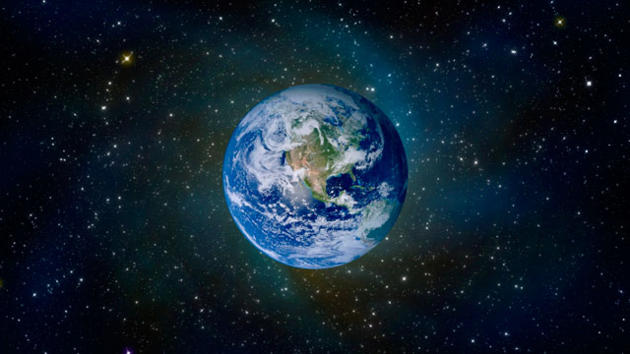 “Egli è Colui che sta assiso sul GLOBO della terra…”
“He is the One who is seated on the globe of the earth…”
(Isaiah 40:22)

As it is known, science taught that the Earth was flat and only in 1521 (over twenty-two centuries after Isaiah) Ferdinand Magellan, Portuguese navigator, he experienced the sphericity of the world by circumnavigating it for the first time.
The book of Job, written in 1500 circa a.C., it also stated a truth that was accepted as such only in the seventeenth century.
Speaking of God's omnipotence, the patriarch exclaimed:

For centuries the Greek philosophers, which are still read by millions of students today, they assumed that the Earth was supported by a giant elephant, or rest on Atlas' shoulders, mythological figure, standing on the back of a turtle.

Isaac Newton with the discovery of the law of universal gravitation he put an end to such absurdities in 1687, over three thousand years after the book of Job was written.

The incalculable number of stars

“The army of heaven cannot be counted…”.

At that time, astronomers were convinced that there were no more than a thousand stars! Six centuries later… the Bible, through the prophet Jeremiah, over six centuries before Christ, he claimed:

At that time, astronomers were convinced that there were no more than a thousand stars! Six centuries later, the Egyptian Ptolemy Claudius instead counted more than three thousand. At the end of the sixteenth century, astronomers from the great European universities believed that there were about seven thousand stars.
Fu Galileo in 1609 with its first telescope to discover over one hundred thousand; a few years later, after having fine-tuned and perfected his tools, he counted three hundred thousand.
Today, the large telescope located on Mount Palomar in California and which has a five meter diameter mirror shows the stars in such large numbers that it is impossible to count them, as Jeremiah asserted twenty-six centuries ago.

The universe is scattered with hundreds of millions of galaxies of various shapes and sizes that contain billions of stars such as the Milky Way, of which our solar system is part, a huge flattened spiral system containing one hundred billion stars.

The spontaneous generation of life

Numerous scientists are quick to assert that there is no possibility that amino acids could have formed enzymes by chance., so by chance, and they affirm it on the basis of probability calculations.
For centuries the hypothesis of spontaneous generation was accepted to explain the origin of life and the same error was still accepted in the last century. The microscope though, in the skilled hands of Louis Pasteur, revealing a new world of microorganisms, established the fact that only life produces life.
The first words of the Bible in fact established that life cannot have its source except in Life:

“In the beginning, God created the heavens and the earth…” (Genesis 1:1) – “I made the earth, gli uomini e gli animali che sono sulla faccia della terra, with my great power…” (Geremia 27:5)

Let's take an example: biochemists have found that a single bacterium contains no less than 1500 enzymes (enzymes = organic catalysts for the acceleration of biochemical reactions), and this without including other complex chemical compounds. Enzymes are proteins, each of which consists of several hundred amino acids. Each enzyme is very complicated, and has a specific task to perform.

How to reconcile evolution by chance with the project of life and’ self-construction contained in the DNA of every living being? If it was the case that decided how to proceed, how to explain a priori registration…?
Our living cells are 60 trillion and all’ inside each of them, none excluded, there is a kind of helical ribbon one meter and seventy centimeters long, the DNA, which contains the code of life, or the genetic information essential for the self-construction of living beings. DNA is immensely thin and immensely long, that of a human being is in total 102 billions of kilometers.

Here is a term of comparison, just to give the idea: the orbit around the Sun of the last planet, the little Pluto, marks the boundary of the solar system. Well… “The DNA tape could stretch out on its orbit, strongly elliptical, letting hang a very long stretch. However, it could disdain that border-orbit, go much farther. It could enclose the Solar System within a circle of 16,2 billions of kilometers in radius… On that circle-orbit it is exactly transcribed how our body built itself, how does it work, how he lives… The thousand large volumes of a huge encyclopedia would be just enough, to contain all the information transcribed on that meter e 70 cm. of DNA tape of each of our cells.” (Domenico E. Ravalico, “Creation is not a fairy tale“, Ed. Pauline – pp. 59,61).
Now, how to reconcile the evolution by chance advocated by non-believing scientists with the project of life and self-construction contained in the DNA of every living being
? If it was the case that decided how to proceed, how to explain the a priori registration of every little detail of that living organism that was forming?
Yup, we can agree with King David when he sang to God:

If the original couple appeared on Earth a million years ago, as evolutionists say, even a low rate of population growth would have given a current population greater than it could crowd into the entire universe! Another argument that sometimes appears in favor of evolution is that it has allowed the earth to reach its current population; while, if you believe the biblical narrative, it is argued that the few thousand years that have elapsed from Noah until today would not have been enough to populate the Earth as it is seen today.

However, if we examine the facts, we find that known history presents us with a regular tendency to a constant and exponential increase in population. The average rate of population growth was 1.7% in the period 1985-90 (with a rate that exceeded 3% in the less economically privileged areas).

A rate of 0,5% it would mean that the average family would only have two and a half surviving children per family, with an average life of 40 years. This is still below the average rate of population growth in the period of one hundred years between 1650 and the 1750, that is, before modern medicine made its effects felt, but in a fairly recent era to be able to give fairly accurate assessments of the population.

If the original couple appeared on Earth a million years ago, as evolutionists say, this low rate would have given a current population greater than that which could crowd the entire universe! If, on the other hand, the current demographic increase began with Noah's family, after the flood, this would agree very well with biblical teaching, even if Ussher's proposed date for the flood is accepted, of 4.300 years ago, which is probably the most recent that can be assigned to it (Henry M. Morris, World Population, in “The King’s Business” – January 1970, once. 19).

Epidemics of course, the war, etc. they can radically lower the rate of population growth, but for an epidemic to exist, a certain level of population is needed, just like for a forest fire: to propagate the trees must be close to each other. It would therefore seem that the further back in time we go, the less likely it is that a phenomenon of this nature could have eliminated a substantial percentage of the population, since contact between people is less and less frequent.
The proof of population growth used against the biblical viewpoint of creation constitutes strictly a proof based on ignorance.

Facts are in favor of creation.

The man really comes from monkeys?

29 August 2015
One can not approach the Bible in various ways. The best would be to study a book at a time. However have taken into account some important factors that, if properly applied,…
Prev Next 1 of 28

Why do I need salvation?