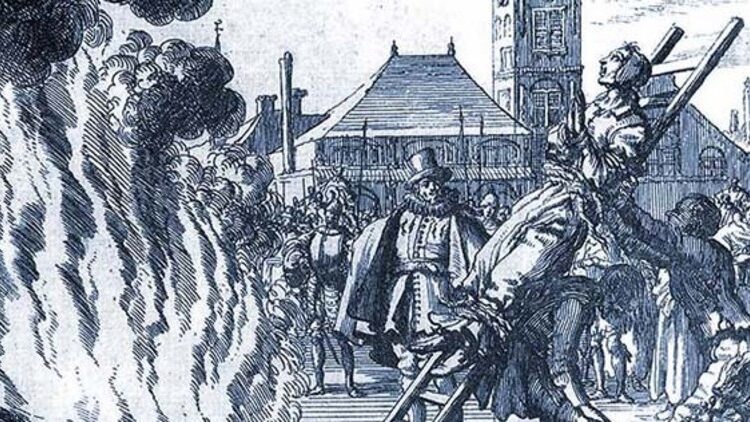 Well, first of all I would go easy on such statements. No church that has existed on the face of the earth of any religion has done what Catholics have done in the name of faith. Not even Muslims.

E’ common opinion among Catholics, which they ignore in primis, what Protestantism is and then what it means to be truly Christian, than today in Italy, Catholic country, Protestants allow themselves to attack Catholics, criticize its doctrines, accuse the popes, to publish books against the Vatican by giving names and surnames, to discredit the figure of the Catholic Church. And this makes them so angry in the name of religious freedom that they say they want. But whoever takes it away? It was not perhaps the Catholic Church in the course of history that created the Index of Forbidden Books or burned Protestant heretics at the stake or fought in the Crusades, exterminating Muslims? Perhaps he did not endorse the extermination of the Jews during the Second World War by entering into a pact with fascism? From what pulpit! And here we are talking about the last century just and not just about 1500.

They cite Calvin's doctrinal errors without knowing how to deny them in the light of Scripture and without even having understood them, they write pages of refutations to Protestant doctrines without even mentioning the Bible, that you get sleepy reading them so much that they always say the same things dictated by anger towards Christians (just as Christ commanded them) who can finally preach in peace without being arrested or killed. But on the basis of what we say a doctrine is right or wrong if we don't use Holy Scriptureas a fundamental support that underlies both our and your faith?

They mention the bloody battles waged by Zwingli against Catholics (then it remains somewhat difficult for me to see those few repressed Protestants who could not exercise their faith and preach, as violent and bloodthirsty against Catholic troops! It may not be the other way around?), the massacre of the one hundred thousand peasants who opposed the theories of Luther, and the drowning of the Anabattisti, without knowing who all these are. They cite the massacre and extinction of American Indians, by the English Protestants. They say the media don't talk about these things and the state protects Protestants. But this is history also written in books, we all know it. Yet who knows why people do not see Protestants as bloodthirsty but as oppressed who have rebelled against Catholicism. Yup, they argue that today there is a whole conspiracy against the Catholic Church by atheists and Protestants (it should be noted that for them being Protestant is like being atheist). But it was time for the talk after centuries of torture and repression by a system that has nothing to brag about., both on a moral and doctrinal level.

Then there is a big difference that you may not realize and on which you would do well to think before making the comparison: to command the burning of heretics or the crusades against Muslims it was the Popes, the spiritual leaders of the Catholic Church, while to command the extermination of the Indians or the wars against religious minorities in Protestant countries, they were kings and princes, certainly not the spiritual guides who adhered to the Bible.

It is true that all of them have made mistakes in history, even the Protestants, even if very few compared to Catholics, perhaps precisely because they are repressed, but it must be considered that all men are in sin (Romans 3:23), only Jesus Christ was perfect and spotless, we human beings, however hard we try not to make mistakes, we are still vulnerable, and this vulnerability also includes spiritual leaders.

Then let us specify one thing that Catholics still do not want to understand: be Protestant belonging to a Protestant church or Protestant state or Catholic by belonging to a Catholic church or state, it does not necessarily mean being a Christian. The Christian wants nothing to do with politics and institutions. The Christian is the one who does God's will, and we find this will of God written in his Word, which is the Bible. Therefore the Christian is the convert, humble, faithful who follows the teachings of Christ, which certainly does not want wars and killings, but he only wants his Word to be preached to the whole world, and what we are going to do.

We don't like to call ourselves Protestants like you, who like to call yourselves Catholics by belonging to the Holy Roman Church, the true church in your opinion. We love to call ourselves Christians, as God commands. We see no other terms to call us. And that's what true Christians do. This is what it means now? It means chi comanda war (German Protestant popes or princes, or English Protestant kings they are) he is not a true Christian. We find scum all over the world and in all religions.

Religion doesn't matter, religion is a human invention, what matters before God is our faith in Jesus Christ. Or perhaps we want to think that those popes who commanded the crusades or burned heretics at the stake were true Christians.? Or we want to think that the Protestant British soldiers (or who commanded them) who killed the Indians are true Christians? Chi comanda war, who kills, those who practice abortion without a minimum of repentance and conversion, he is not a true Christian. I also mentioned abortion because Catholics accuse Protestant churches of being in favor of gay marriages, euthanasia and abortion. But not all Protestants are the same (those who defend these anti-Biblical practices are not true Christians), as not all Catholic churches are the same. How many are you? Romans, Charismatics, Mariani, Ambrosians, Franciscan, Dominican? Well you see how many denominations? What changes? You all believe the same thing? Well we Protestants too, even if there are minimal differences for minor and minor things that do not jeopardize salvation, we all agree that it is faith in Jesus Christ that saves and we defend the sole authority of the Bible. There is no Eucharist that makes the difference, the Eucharist does not save, rites do not save, works do not save (because even atheists can do good works), there is no such thing as one rite or another to save oneself, there are no superstitions, it is only faith that saves us and our trust in the Savior. Like not all Protestants are Pentecostals, considering that make a nice soup on your sites and label all Protestants as Pentecostals.

Dear Catholics, remember that the Christian is an individual who has a relationship with God, it is not identified with a Christian church or a nation. Each of us will be accountable to God for what he has done, God will not judge the collective or a religion as a whole, He will judge us individuals, taking true Christians from all over the world to take them to heaven with him. So stop bragging that you are the true church and think you are saved just because you belong to it. As far as we are concerned, the Apocalypse invites us to come out of the false church (Apocalypse 18:4), the Babylon of our day (Apocalypse 17-1-18) living in luxury, it is located on the eternal city of seven mountains, she is corrupt and has committed atrocities by burning the saints of God. But we have blinders and hardened hearts if you don't realize it and don't read the Bible that, consider only a literary text like the books of fairy tales.

Here are the Catholic spiritual leaders, who wrongly and blatantly claim to come in God's name, always present during torture and killings. How can you believe you are following the true church and righteous doctrines not found in the Bible but emanated by people who have been able to do this?

You Protestants don't know about charity

11 June 2015
Hundreds of books have been written on the subject of the evidence of the divine inspiration of the Bible, evidence that is numerous and varied. Unfortunately most of the people, today, hasn't read any of…

29 August 2015
The Bible is not made up of a single book, but from an entire library of 66 books of different genres, written over many centuries by numerous authors. In the Bible there are entire volumes of…
Prev Next 1 of 28

28 December 2021
The Bible doesn't say anything specific about cancer. however, this does not mean that it does not address the problem of disease. King Hezekiah was sick with "bolle" ( 2 Re 20:6-8 ), that it actually would…