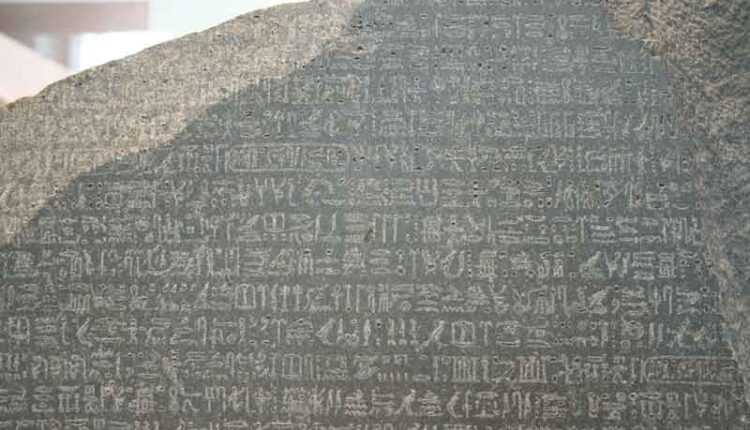 The era of the excavations in Egypt was opened in 1798 with Napoleonic Campaign. The French leader had brought following the army about 120 scientists, who explored and described the ancient ruins for the first time. Their work was published in 36 large volumes, and for the world of the time it was a sensational revelation, because practically nothing was known about Egypt except what they had told about it Herodotus and the Bible.

Also during the Napoleonic campaign an officer was found, in the Delta area, the famous Rosetta stone, now kept in London. It is one of the best known discoveries made in Egypt, not so much for the historical information it provides, how much because it was the key to deciphering the “hieroglyphs” Egyptians. The language of Egypt had been considered dead for centuries and for almost two thousand years his writings had seemed completely inexplicable. Now, the Pietra di Rosetta contained a decree in honor of Ptolemy V, of the 196 a.C., written in three languages, or rather in two different scriptures of the Egyptian language, hieroglyphic and demotic, and in Greek. But the Greek writing was legible! Comparing the Greek text with the hieroglyphs, the French Champollion he managed to find the key to the decryption. It was the 1822. That was the beginning of the’Egyptology, and a vast field opened up to historical investigation.

The ancient Egyptians wrote a lot and everywhere. Thus, historical documents gradually came to light, letters, religious texts, literary works, news of daily life. Egyptian hieroglyphic writing, called the most beautiful in the world, it consists of some stickers with consonant value, others with bilitter or triliterus value, and many other signs with a definite value (in all over 760 signs). Each Egyptian monument contains inscriptions; the walls of temples and tombs are practically scattered with them, not to mention the papyri. In addition, the tombs of kings and officials have provided a wealth of objects from which you get the idea of ​​what everyday life was like. It was not to differ much from that of the land of Canaan, where unfortunately almost nothing has survived the destructive forces of man and time. Therefore the objects found in the land of the Pharaohs also have an immense value to make us understand how people lived in the Holy Land..

The Egyptians then drew a lot, and carved in very delicate bas-reliefs. On the walls of the tombs and on the papyri there are scenes of work in the fields, hunting and fishing, of weaving, packaging of vases, working of jewels and metals, brick making, sculpture, building temples, warfare with armed chariots and cavalry, and then scenes of domestic life, musical entertainment with players and dancers, scenes of illness and death, etc. Perhaps not even a modern photographic reportage could have provided us with such numerous and incisive details.

The evidence immediately emerged with the descriptions reported in the Bible. The believers, especially in Great Britain, they were fascinated by it. A booklet, printed in London in 1838, is titled “Illustrations of the Bible taken from the Monuments of Egypt”, and contains beyond 280 verses of the A.T.. illustrated from approx 100 figure egizie. (When this book was published, the reading of Egyptian texts was still in its infancy. Hence the author, for his comparisons, he used only the paintings and bas-reliefs). In the closure of the volume we find these words: “Illustrations of Biblical History, that we have reported in the previous pages, show us that the two oldest testimonies in the world, one figurative and the other written, mutually illustrate and confirm each other, in circumstances that make an intentional coincidence entirely impossible”.

Egyptology was still in its infancy but those believers, good connoisseurs of the Bible, they had already begun to understand the language of stones!

Biblical Archaeology: the Code of Hammurabi

A Catholic of idolatry or a…