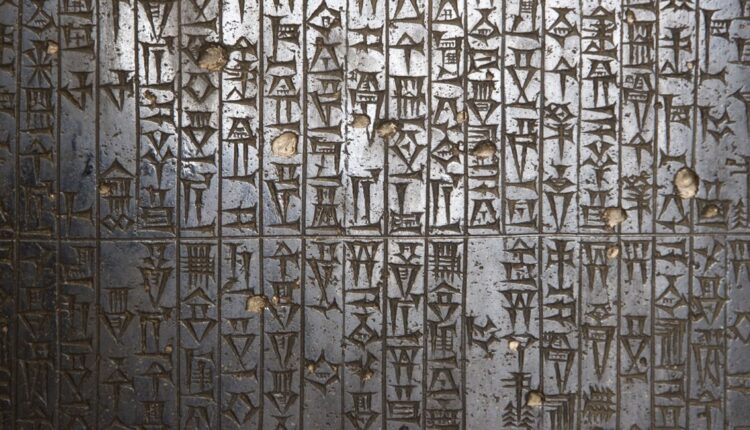 As was the case for Egypt, also in Mesopotamia the era of exploration was inaugurated with the deciphering of ancient inscriptions and with the rediscovery of the disappeared languages.

Mesopotamia literally means (the greek) “Country that is in the middle of rivers” (the Euphrates and the Tigris).

In this region, where the stone was rare or almost non-existent, the only abundant matter was clay, which served since the beginning of the 3rd millennium also as a writing support. Short wedge-shaped marks were engraved on the fresh clay surface with a cane stick, variously arranged (hence the name cuneiform writing). For the deciphering of this writing, real geniuses were needed. The German Grotefend first tried his hand at lyrics, arriving at some modest results. Later the English H. Rawlinson, officer of the company of the Indies, he took advantage of his extended stay in Persia to study the Behistun rock inscription closely. This was a trilingual inscription from the Achaemenid era. Completely fascinated, the English did not rest until he finished copying the entire text, what he did at the cost of great effort, hanging on a rope facing the wall for whole days, even putting his own life in jeopardy.

Then Rawlinson set about translating, starting with writing more “simple” in Old Persian, and then move on to the other two, Babylonian and Elamite. After a few years Rawlinson and other scholars claimed to understand the texts. The definitive test was carried out in 1857, edited by the Royal Asiatic Society, who entrusted a recently discovered text to three scholars independently of each other, with translation prayer. When the results were compared (which differed only in a few insignificant details) it was understood that another barrier had fallen, as it had already happened 35 years earlier for ancient Egypt: was born there’Assyriology!

Since that time, the languages ​​of the ancient peoples of Mesopotamia began to reveal their secrets to scholars.

Meanwhile, excavations proceeded in the piles of ruins of the Tigris and Euphrates valleys. Shortly after the 1840 the French-Piedmontese Paul Emile Botta dug, a Khorsabad, the palace of Sargon II, king of the Assyrians, remembered by the Bible (ls. 20:1). Some reliefs of that building are preserved today in the Turin Museum. Here is a note from the management of the Museum: “The discovery of the grandiose complex with the splendid reliefs revealed Assyria to the world, until then known only from vague biblical references”. Typical statement!

Similar claims will be made with Nineveh's discoveries, Babylon, the Hittite palaces, the excavations of Ur, the palace of the Persian Xerxes (Assuero), etc. The stories of the Bible therefore had archaeological references also for the Mesopotamian area.

In Khorsabad, gigantic winged bulls with human heads had also come to light ". Some of these bulls are now on display in the Louvre.

Nineveh was discovered “from English H. Layard under the mounds of ruins of the Qujungiq tell. (Within a radius of 70 Km found Nineveh, Nimrud, Assur, the Palace of Sargon II; Upper Tigris region). The Nineveh bas-reliefs are now in the British Museum, (In the last century it was customary to bring the pieces found in the various museums of Europe, where everyone could admire in amazement the unknown world of that distant past).

Around 1870 The royal archive of Ashurbanipal was then discovered in Nineveh. There were thousands and thousands of tablets, with religious texts, poems, letters, reports of military campaigns (including campaigns against the kingdoms of Israel and Judah, with the names of the Jewish kings). Of great interest for the analogies with the biblical stories are the tablets of creation and the flood.

Towards the end of the last century, by the highly skilled German archaeologist Koldeway, fu;discovery of Babylon. Babylon quickly proved to be a place fraught with difficulty, as it had been destroyed more than any other ancient city. But the Koldeway excavation was a true masterpiece of scientific exploration, and the ruins of Babylon became a mine of information on history, Babylonian culture and civilization.

The splendid Ishtar gate, studded with soul reliefs them fantastic, it was entirely rebuilt in the Berlin Museum. Some reliefs of lions are exhibited in the Louvre. Countless bricks have been found engraved with Nabucadnetzar's name, well known to Bible readers.

A Susa, in Persia, the French excavated the palace where Xerxes lived (the Ahasuerus of the book of Esther). And in Susa they found the stele of Hammurabi, brought there by the Elamites as war prey from Babylon. E’ a beautiful dark stone column on which Hammurabi, king of Babylon, contemporary of the patriarchs, had had it engraved, in very sharp wedge-shaped characters, its legal code, which presents parallels with the laws of the Pentateuch.

In Lower Mesopotamia the excavations were conducted by the English archaeologist Sir Leonard Woolley, who dug in Ur from 1922 al 1934. (Ur is remembered by the Bible as “Ur of the Chaldeans”, homeland of Abraham, Genesis 11:31). One of Woolley's greatest discoveries was that of “Royal Tombs” (1Half of the third millennium BC), in which objects of inestimable value and exceptional refinement were found. Ur was one of the capitals of the Sumerians, non-Semitic population settled in Lower Mesopotamia since the mid-fourth millennium BC. Notable among Woolley's discoveries at Ur was also a sediment layer attributed to “Flood” and many houses from the Isin-Larsa period, dating back to the time of Abraham.

27 May 2015
The question we must ask ourselves is how can we be sure that the Bible is God's Word, and not a good book? What is the one thing in the Bible that distinguishes it from all other books…
Prev Next 1 of 28

23 June 2015
I would like to know as it is difficult to find a truly God-inspired church today, if it is not the case to pray in my room instead of being in a non-Christian context? Absolutely yes.…