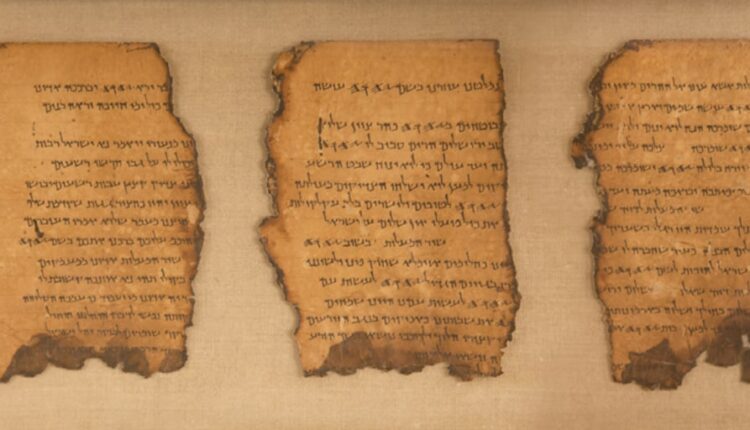 Unfortunately, there is no real possibility of finding manuscripts of the Hebrew text dating back to periods prior to that of the so-called Masoretic text.. (text of the Old Testament dating back to the 9th or 10th century AD. C.).

Just as his book was being printed, in 1947, began a series of archaeological discoveries that would have undermined such claims forever. Until then the only ancient texts that contributed to the understanding of biblical history, they were the Babylonian clay tablets and the Egyptian papyri; no manuscript of the Old Testament dating back to the period before Christ had ever been found.

All this changed radically with the discovery of some scrolls preserved in clay pots in caves along the northwestern side of the Dead Sea. With these rolls, the world had manuscripts of the Old Testament available that were a thousand years older than those previously known.

The discovery caused a wave of enthusiasm. Professor William Albright, eminent world-renowned archaeologist, he congratulated one of those responsible for the discovery, John Trever, saying:

My sincere congratulations on the most significant manuscript discovery of our time! I am sure that the text found is older than that of the Nash papyrus (a very small part of the Old Testament dated between the second century BC. and the first century A.D.) and I suppose it was written around the year 100 a. C. What an amazing find! There is no doubt, Moreover, of the genuine nature of the manuscript.

Before the discovery of these scrolls, the oldest copy of the Hebrew Old Testament in full form (the Babylonian code of 1008 D.C.) dates back to 1.400 years from the date of completion of the original draft. Now, with the fragments of the Dead Sea, that period was shortened by a thousand years.

There was at this point an absolutely unique opportunity to check whether, during those thousand years, the Hebrew text had been accurately transmitted. The results of the comparison were positive. The Jewish scribes had been faithful in copying the biblical manuscripts!

Their well-known reverence for the Scriptures had already been described in the first century by the Jewish historian Josephus Flavius:

We have practically demonstrated our reverence for the scriptures. Even if long ages have passed, no one dared to add, remove or even alter a single fairy tale; there is an instinct that every Jew carries within himself from the day of his birth, which prompts him to view the scriptures as divine decrees by which to live, and if necessary, even die peacefully.

Comparison of the Masoretic text, on which our Hebrew Bibles are based, and the Dead Sea Scrolls (that reported, in full or partial form, all the books of the Old Testament except Esther), confirms the attitude described by Josephus. Indeed, it appears that the two texts, after a thousand years of hand-made transcriptions, they were nearly identical (except for some minor, insignificant variant).

The Old Testament books found in Qumran (the name of the place where the Dead Sea Scrolls were discovered), they are the same as we have in our Bibles today. As with any text that has been reproduced by hand, there are minimal variations, but we can consider the biblical text totally reliable.

The Dead Sea manuscripts are therefore very important historical documents that attest to the reliability of the biblical text.

27 May 2015
The question we must ask ourselves is how can we be sure that the Bible is God's Word, and not a good book? What is the one thing in the Bible that distinguishes it from all other books…

The conversion or the new birth: as it happens?

22 November 2012
What does the Bible say about the end of the world? We should believe these prophecies? Heaven and earth will pass away, but my words will not pass. As for that day and hour, nobody knows them,…