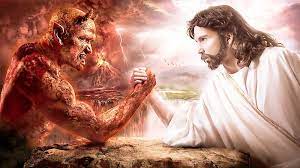 Our Lady has healed and the devil cannot heal

False! The devil is able to do wonders and healings, as the Bible says. He can do it because the Lord allows him to test us. It can make us sick and heal us. We find such an episode in Job 1:6-12 and in the tale of the possessed of Gerasa, where we find the demons who ask permission from Jesus to enter the herd of pigs (Marco 5:1-18). The purpose for which it does it, But, must make us worry, because with the healing that God did not work, we consecrate ourselves to that entity that healed us, be it the Madonna or what saint. Healings are done all over the world, even in pagan environments by the spirits of oriental religions, and the healing is perhaps a proof that all this momentary good (we mean the good in material life as long as we live on this earth) be from God? Let's reflect on this.

We know that Satan's purposes are always evil and that he only aims to destroy (Giovanni 10:10).

The devil is able to do wonders and healings, as the Bible says.

First of all “disguises himself as a minister of justice” to deceive:

No wonder it is, for Satan himself is transformed into an angel of light. It is not surprising, then, if his servants masquerade as servants of righteousness. (2Corinthians 11:14-15)

Which means that Satan and his angels are masquerading as “good” preaching justice and doing prodigious works to then take the souls who consecrate themselves to them.

In Apocalypse 13 we find “the beast” (some interpret it as a figure of Satan, of the Antichrist) receives a fatal wound but is healed: “And I saw one of his heads as being mortally wounded; but his deadly wound was healed; and all the earth, astonished, went after the beast”. That “works great wonders”(13:13).

But the fact that Satan can make surprising signs goes back to the Old Testament:

So Moses and Aaron went to Pharaoh and did as the LORD commanded. Aaron threw his staff in front of Pharaoh and in front of his servants and it became a serpent. The pharaoh in turn called the wise men and the enchanters; and the magicians of Egypt also did the same thing, with their occult arts. Each of them threw down his staff and the sticks became snakes; but Aaron's staff swallowed up their staffs. (Exodus 7:10-12)

God had sent Moses to free the children of Israel who were under severe slavery in Egypt. Finally, after 400 years of torment and slavery, the Israelites were about to be freed from Egypt. God sent Moses and Aaron to confront the Pharaoh, to ask for the release of the Israelites. God told Moses and Aaron that Pharaoh would like to see miracles. God had taught them what to do. When Pharaoh asked to see a miracle, Aaron threw his staff on the floor and it became a snake. It should come as a surprise to a Christian that God works miracles and the adversary does them too? just think that in the same episode, Pharaoh's magicians continued to perform miracles with snakes and sticks, a struggle between God and Satan to see who is the most powerful, and of course in the end God turned out to be the strongest and the Israelites were released from bondage.

Unfortunately, believers still today do not believe in the miracles and signs that the devil is able to do to attract attention. And this is a disastrous evil! The fact that Satan and his false prophets can work miracles is well documented in the scriptures.

And when people don't want to believe in God but believe in the miracles of the enemy, Scripture says these people “his heart is hard“:

But the magicians of Egypt did the same thing with their occult arts, and Pharaoh's heart was hardened: he did not listen to Moses and Aaron, as the Lord foretold. (Exodus 7:22)

When the devil tempts Jesus in the desert he tells him that “he has been given great power”:

The devil led him up, he showed him in a moment all the kingdoms of the world and told him: “I will give you all this power and the glory of these kingdoms; because it was given to me, and I give it to whoever I want. So if you bow down to adore me, it will be all yours ". Jesus replied: «It is written: “Worship the Lord, your God, and to him alone you render your worship”». (Luca 4:5-8)

Satan is a being “finished”. The devil is NOT omnipotent, it is not omnipresent and it is not omniscient. Satan is a murderer. It was not God who murdered the 2.000 children at the time of Christ's birth, was Herod. Herod was so obsessed with maintaining control of his kingdom over Rome that he was willing to kill 2.000 innocent little children trying to kill the Christ child. Mass murderers such as: Hitler, Pol Pot and the Roman Catholic Church in the early centuries and again the Holocaust, they were ordained by people possessed by the devil.

Satan is a limited being, corrupt and perverse in every sense of the word. Satan is a master of deceptions, a liar through and through. It is interesting that the occult loves to flaunt Satanism blatantly. It is not a surprise, the great majority of society , either he does not see evil or he does not care. Not surprisingly, most people don't know the Lord Jesus Christ. I never am “born again”. Society is full of religious people, that define themselves “cristiane” people who all know religious jargon, but their heart is far from God. I'm on the road to hell.

We certainly do not condemn them, because the Bible condemns all of us as guilty sinners deserving of the lake of fire (Romans 3:10-23; 6:23). The only way any person can go to heaven is to have the remission of sins. Only Jesus Christ can forgive sin, because only Jesus died for our sins according to the scriptures.

The Bible is full of historical prophecies written in advance and all of them promptly come true. The following verses in the book of Revelation reveal that the Antichrist works miracles to deceive the masses …

They are spirits of demons capable of performing miracles. They go to the kings of all the earth to gather them for the battle of the great day of the almighty God. (Revelation 16:14)

But the beast was taken, e with her was taken the false prophet who had done wonders before her, with whom he had seduced those who had taken the mark of the beast and those who worshiped his image. Both of them were thrown alive into the lake burning with fire and brimstone. (Apocalypse 19:20)

The Devil is a master forger with his fake bibles, false religions, false prophets and false doctrines. As believers, we have the Holy Spirit of God living in our heart (1 Giovanni 4:4). Greater is He (Jesus) that is in us, of him (Satan), which is in the world.

What good would Satan do all this for?

Satan is the deceiver par excellence, the enemy of God, and to take souls it certainly does not manifest itself as “bad”. Who would ever listen to him? His job is to deceive by mixing truth with falsehood , just as he told Eve “It is not true that you will die, you will become exactly like God because you will acquire the knowledge of good and evil!”. Now it is true that by eating from the tree they would have acquired the knowledge of good and evil, but on the other hand, that knowledge would lead them to death and destruction. And so it was. This because? Why Adam and Eve, instead of following the commandments of the Lord, they listened to the deceiver, as happens today and always to peoples who refuse to listen to the sovereign Word of God and listen to the spirits. In the end who will have been a follower of Satan, even not knowing it (because not even Adam and Eve knew that that was Satan, the enemy of God), they will be cursed during the coming Judgment, and will be entrusted to the entity they followed in life.

We must test any miracle or prodigy whether it is God or Satan. Recall that the Pharaoh and the magicians had the satanic power to work miracles. Let us remember that the Antichrist deceives the masses with miracles, signs and wonders. The holy Bible clearly teaches that God speaks to us in these last days through his Son (Jesus Christ, the Word of God, the Revelation 19:13; Jews 1:2). Let the Word of God and the Holy Spirit be your guide.

As born again Christians, we must expose the works of SATAN! If we don't, then who will ? We want to think of it as the New Age philosophy that is growing rapidly even in the Catholic sphere? The largest religion on earth? New Age followers teach that there are many paths to heaven, but the Bible proclaims that there is only one way: Jesus Christ (Giovanni 14:6, proceedings 4:10-12). Be careful not to be deceived … “Because narrow is the door and narrow is the way that leads to life, and few are those who find it”(Matteo 7:14).

The Catholic Church is preparing to receive the Antichrist en masse and is not even aware of it!

Catholics are idolaters, they all adore Pope Mary and prostrate themselves before them. Exodus 20:4,5 it also strictly forbids bowing down in front of statues or images.

2 Tessalonicesi 2:10 it tells us that whoever does not love the truth will follow the beast into perdition. Jesus Christ is really the only hope of escape. Love the truth ? You have to be born again!

May God speak to your heart as to your minds.

That religion is a religion that protest?

1 September 2015
objection: How can you believe the story of the life of Jesus, reported in the New Testament, whereas it was written long after his death? Many repeat the accusation that…

29 August 2015
One can not approach the Bible in various ways. The best would be to study a book at a time. However have taken into account some important factors that, if properly applied,…
Prev Next 1 of 28

8 March 2015
I segni degli ultimi tempi Dio mise Adamo in un giardino di delizie, but that first man took the only forbidden fruit by disobeying God's order. Thus he was cast out of Eden. A few centuries…