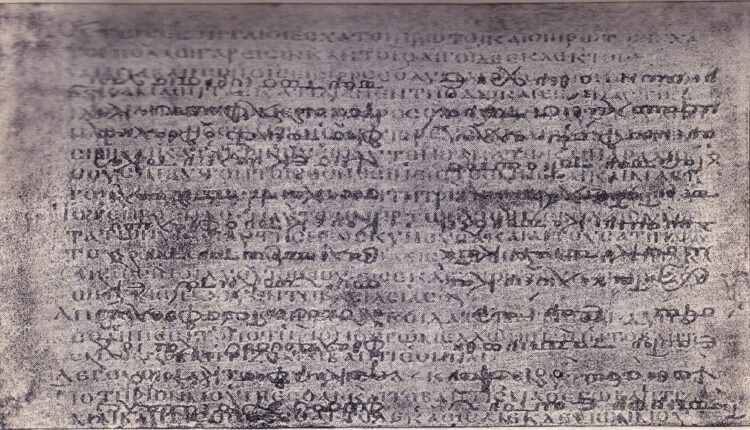 Schedules are manuscripts in which the original text has been washed or scraped off, to make room for another text. His 241 biblical codes in capital letters, 55 are schedules. The text of the Bible of the Ephrem code dates back to the fifth century. D.C.. Around the twelfth century. the parchment sheets were washed to erase the text of Scripture and copy i 38 treatises of Ephraim in Greek. After the fall of Constantinople the code was brought to Florence, then he moved to Paris following Catherine de’ Medici. Now it belongs to the National Library of Paris.

The underlying text of the NT was deciphered in 1834 from Fleck and in 1843 from Tischendorf with the help of chemical reagents. In 1845, Tischendorf published the OT. The chemical reagents used, Unfortunately, they had the drawback of blackening the parchment over time, thereby making the text unreadable. Today it is possible to read the text using ultraviolet rays. The codex is in parchment, account 209 sheets measuring approximately 33x27cm each. The text is on one column per page. The scribe did not insert any spirits, nor accents, but only a few apostrophe. Each period ends with a point. Highlighted letters are frequent, as for the Alexandrian codex. The entire Bible was originally contained in the code. Today they are preserved 64 TA sheets containing almost all of the Qoheleth, fragments of the Song of Songs and Proverbs, part of Sirach and of Wisdom. From the NT (145 sheets throughout) portions of all books remain, except the second letter to the Thessalonians and the second letter of John.

30 August 2015
The comparison of manuscripts and ancient versions shows us that the text of the Bible, transcription transcript, It has come down to us substantially intact, but with numerous variations…
Prev Next 1 of 28

If not married to church I can take my stepdaughter…