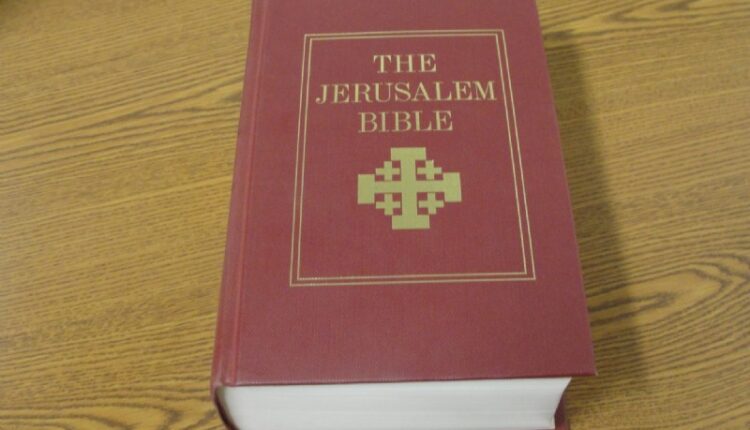 Already the first edition of the 1955 it represented the fruit of the work of a team made up of the best exegetes in France, under the direction of the Dominicans of the famous Biblical School, the Bible School, built in the Basilica of St. Stephen in Jerusalem, by Fr.. Lagrange, in 1890. For the edition of 1973 translations and notes have been revised and verified. Among others, R.de Vaux collaborated, P.Benoit and Mons.L.Cerfaux. In the Jerusalem Bible, notes of textual criticism are of great importance, which aim to re-establish the original biblical text and the main known variants, in order to allow the reader to become aware of it. Le sigleTM (Masoretic text), LXX (seventy), follow (Translation:), Q (Qumran) and others indicate the different lessons present in the different ancient texts. The Italian edition of the Jerusalem Bible did not want to re-translate the biblical text translated from the original languages ​​into French into Italian, but he chose to simply reproduce the text of the CEI, edited by the Italian Episcopal Conference, according to “editioprinceps” of the 1971. When the abbreviations BJ are not found in the notes (Bible de Jerusalem) o BC (CEI Bible) it means that the two versions (French and Italian) coincide. When the two abbreviations appear, it means that the two versions adopt different translations and the reasons for one and the other are explained in the note. In these cases the notes of the BJ have been adapted to the BC version.

Each book or group of books is preceded by very detailed general introductions. The marginal references are faithfully reproduced by the BJ. A system of signs helps the understanding of the text, referring from time to time to other biblical passages, useful for understanding a verse.

Nobody believes in the myth of the ape-man anymore. Scientists first. Why then insist?

30 August 2015
This code takes its name from the fact that it belonged to the reformer Teodoro di Beza. Born in Geneva on 24-6-1519, Calvinist, Calvin's favorite disciple, director of the Academy…
Prev Next 1 of 28

Who are the Evangelical Christians?