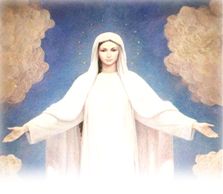 The apparition of Mary often declares herself CORREDENTRESS TOGETHER WITH CHRIST of humanity. THIS APPEARS TO BE THE PRINTER TEST THAT E’ OF DEMONIC NATURE. Even the faithful exult in signing petitions to be sent to the Pope to declare the dogma of co-redemption.

In the message the 31 May 1954, the Feast of Mary Mediatrix of all graces, Kunzli:

Once again I'm here. The CO-REDEEMER, the Mediator and the Advocate stand before you. I chose it this day: on this day the Lady will be crowned. Listen well, theologians and apostles of the Lord
Jesus Christ: I have given you the explanation of the dogma. Operate and demand this dogma. You will have to petition the Holy Father for NEW DOGMA… In this date, "The Lady of All Nations" will receive her official title of "Lady of All Nations."”

In recent years the pope has received more than 4 million and a half signatures to declare this dogma gives 157 countries including by Mother Teresa of Calcutta, more than 500 bishops and several cardinals of the Vatican. And it is not so often that the faithful ask the pope to make an infallible declaration.

Even if the dogma has not yet been declared, even if I assume you are missing a little, Mary is co-redemptrix for Catholicism, this is what they teach in the books intended for the seminary of priests and clerics:

MARIA IS’ CORREDENTRICE OF HUMANITY. Maria “depending on Christ, but as the only principle with him, it cooperated in the objective redemption and therefore it was true co-redemptrix … depending on Jesus, but as the only principle with him, satisfied for all the sins of humanity, he paid God the price of our deliverance, he earned all the graces for men, crying (in its own way) God with his voluntary and necessary contribution to the sacrifice of the cross” (Pasquale Lorenzin, Dogmatic theology, 1968, once. 499-500).

Who goes ahead and does not remain in the teaching of Christ, has not God. He who abides in the doctrine, He has the Father and the Son. (2Giovanni 9)

The Bible of the LXX

30 August 2015
This name refers to the first Greek version of the Hebrew Bible, made in Alexandria of Egypt, for the use of the Hellenized Jews who resided there, who generally no longer understood…
Prev Next 1 of 28

The New Testament was written too long after…