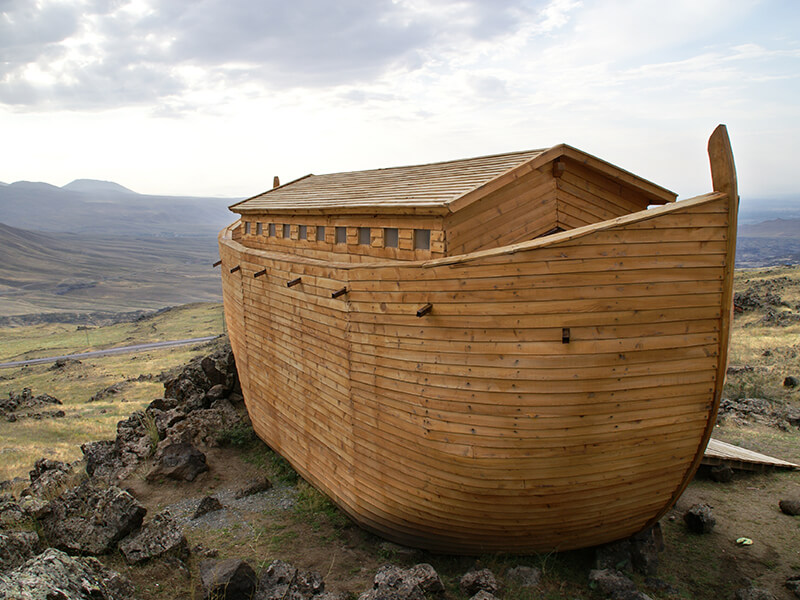 Noah had the ark accommodate all “species” of his time. The number of animal species of that era, however, was very likely less important than is generally assumed (see point 6. “Biology tells…”). The climate of that time, almost uniform, it probably did not have very different climatic zones and therefore profoundly different ecological zones, as seen today. It is not unlikely that, then, animals chose their habitat area more according to altitude than latitude. But how could the ark still contain all the animals? Meanwhile, it should be noted that all marine species do not naturally appear among the animals that entered the ark (cf.. Genesis 7:8). Furthermore, we must not forget that the enormous reptiles of the Secondary, dinosaurs for example, they did not enter it; this explains their sudden disappearance at the end of the Cretaceous (see point 7.h. “Paleontology and Stratigraphy”: Disappearance of the Dinosaurs).

Let's see the dimensions of the ark indicated by the biblical text: 300 cubits of length x 50 cubits of width x 30 cubits in height (Genesis 6:15). This corresponds to approximately 150x25x15 meters, with three decks. These dimensions correspond to those of a ship of considerable tonnage: more than 20.000 tons.

That is the capacity of eight freight trains of 65 wagons each. When you think that two such trains they can carry up to 30.000 medium-sized animals, come i montoni, we realize that the ark could contain a large number of cattle. How to solve the food problem for a whole year, in fact, the animals and people remained in the ark? One possibility could be suggested by hibernation that still affects a good number of animal species today. The climatic conditions during the flood must have been greatly disturbed, which could have favored the hibernation of a large number of animals.

Dinosaurs and the Bible

Bible and science as opposed?

31 August 2015
The Tyndale Bible was the first modern English Bible. William Tyndale was an Oxford graduate priest, still a student at Cambridge when Martin Luther posted his theses in Wittenberg. In 1523,…
Prev Next 1 of 28

What distinguishes Christianity from others…