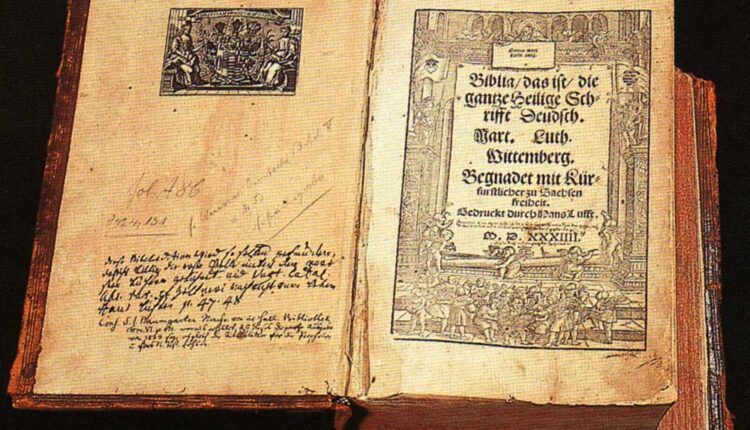 Before Luther they existed at least 17 German versions of the Bible. The great reformer, however, wanted to make a version that was more in line with the ”feel” of the German people and that it was also derived from the original sources. He did not translate the Vulgate, but he went back more than anything else to the Greek and Hebrew text proposed by Erasmus in 1516. The language used was the German chancery and the Bohemian-Luxembourgish one, enriched by the vulgar talk of its people. Exemplary, to understand his way of translating, his ”Message about translate” of the 1530. God's word, directed at all, it must be understood by all. It is not about, Luther says, to wonder how Latin should be transferred into German, rather ”questioning the mother at home, children on the street, the people at the market”.

In 1534, edita da Luft a Wittemberg, the complete translation of the Bible came out. It is not entirely attributable to Luther, who actually got help from the most talented philologists of the time, many of them his friends: Melantone over all. The result was a masterpiece of Germanic literature, rather, the very birth of that literature, so much so that it has been said that Luther's Bible is for German literature what Dante's Comedy is for Italian literature.

26 November 2015
Question: Ciao, I have 21 years and I'm very slowly getting closer to Jesus. I'm asking a lot of questions, and what matters most to me is to ask an expert (you, in this case) it's how it can be reconciled…